The Austrian team was undoubtedly the biggest surprise during the qualifiers for Euro 2016, easily winning group G, unbeaten with 9 wins and 1 draw, leaving the 2nd place Russia 8 points behind and reaching its second European in its history (2008) as one of the great question marks of the competition, but considered by some European journalists as the main favorite to win Group F.

Despite playing under the radar for many fans, quality is not lacking in this Austrian side. The focus on their defense, despite Dragovic’s great qualifiers, is on the flanks. Florian Klein is one of those wingbacks that “comes and goes” throughout the whole match, and Fuchs, at the age of 30, just reached his finest moment in European football after a fantastic season with English champion Leicester. 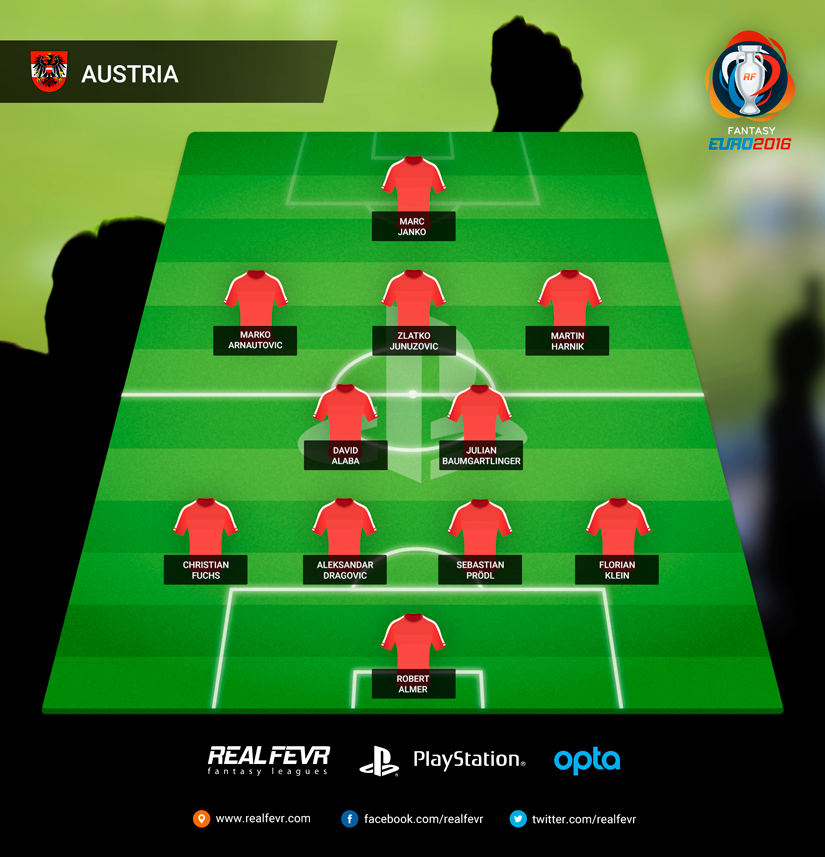 But the great strength of Austria lies on their five midfielders. Aged 23, and despite playing mainly as a center-back for Bayern Munich, David Alaba is certainly the biggest star of this group. Quick and fast, a smart passer, he’s the key-man for Marcel Koller’s imposed rapid offensive transitions.

Further ahead operates a creative trio, keen on exploring opposite defenses backs. One of the Werder Bremen’s duo, Martin Harnik is perhaps the most complete midfielder they have, competent both in defensive duties as offensive ones, accumulating 68 goals in 6 seasons in the Bundesliga.

The talented Arnautovic will play on the left and try to follow up his best season since 2009. The Stoke player, unsuccessful at Inter Milan, scored 11 goals and had 6 assists in the Premier League and finally seems able to put in place the pure talent field everyone acknowledges him.

As the lone striker, the Austrians deploy the unspectacular but very efficient Marc Janko. In the last two seasons, 6 goals in 54 matches for club, and 7 goals with 2 assists in 9 games for his country.