Even if the 23 players the Italians sent to France are considered one of the weaker Italian groups of the past decades, the truth is that the 2nd-placed team in the last European Champions easily won Group H, and is massive favourite to join Belgium in the next phase, in a group where Sweden and Ireland can hardly intrude.

History tells us that even when they are not at their very best, the Italians almost always find a way to have relative success in international tournaments, although results show they are definitely better at World Cups than Euros, winning only at home in the distant year of 1968.

Antonio Conte will keep the 3-5-2, and has recently stated that the three Juventus defenders are the only players with guaranteed spot in the lineup. To the vast experience gained throught their carrears, add the fact that they play together throughout the year, and that should ensure what it is always Italy’s first idea of game, their defensive solidity. 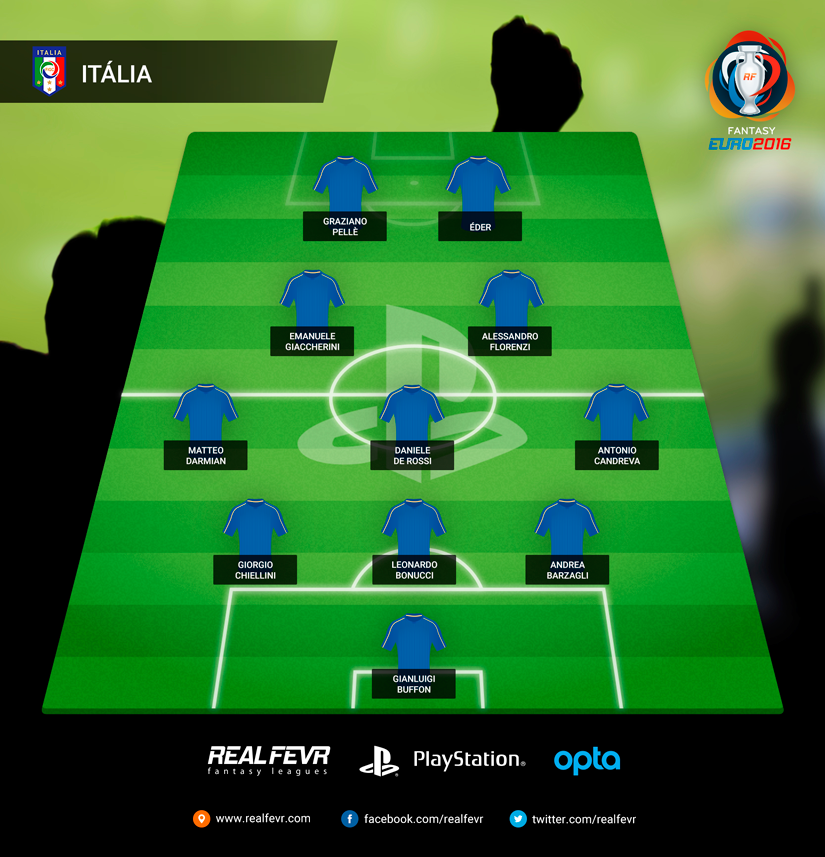 The Italian midfield, an important sector in all formations and even more in a 3-5-2, arrives in France in shambles, depleted of Pirlo (not called up), Montolivo, Marchisio and Verrati lost to injury, the latter sure starts in normal circumstances. Recent friendlies have cleared some doubts on who has an advantage into the starting eleven, and the experienced Daniele de Rossi will make a trio in the center with the less renowned Florenzi and Giaccherini.

On the wings, Candreva from Lazio and Man United’s Darmian, who cover all the flank and a big part of what this Italian team can really do, keeping equilibrium in numbers on both ends of the pitch.

Graziano Pellé looks inked in up front, probably paired with the Italo-Brazilian Eder or Lorenzo Insigne. The Southampton player had another relevant season in the Premier League, scoring 14 goals, still a little shy of the gold standard he set at Feyenoord, celebrating 55 times in just 66 games.