The Portuguese national team reached France after breezing through its qualifying group, winning every game apart from the home opener against Albania, in a game that cost manager Paulo Bento his job being replaced by Fernando Santos. Portugal has a rich history in the Euros, always advancing to the knockout rounds every time they qualified, and reaching the semi-finals three times in the last four appearances.

Having only conceded 5 goals during qualifying, the portuguese defense, with 71 years combined between their center-halves – 38-year old Ricardo Carvalho will be the oldest field player of the competition and Pepe is younger but already in his thirties -, compensates in experience what it lacks in speed. Cedric Soares and Raphael Guerreiro should be their wing-backs, with loads of forward runs, essential to Santos’ tactical formation, with fake wingers opening the flank with interior runs. 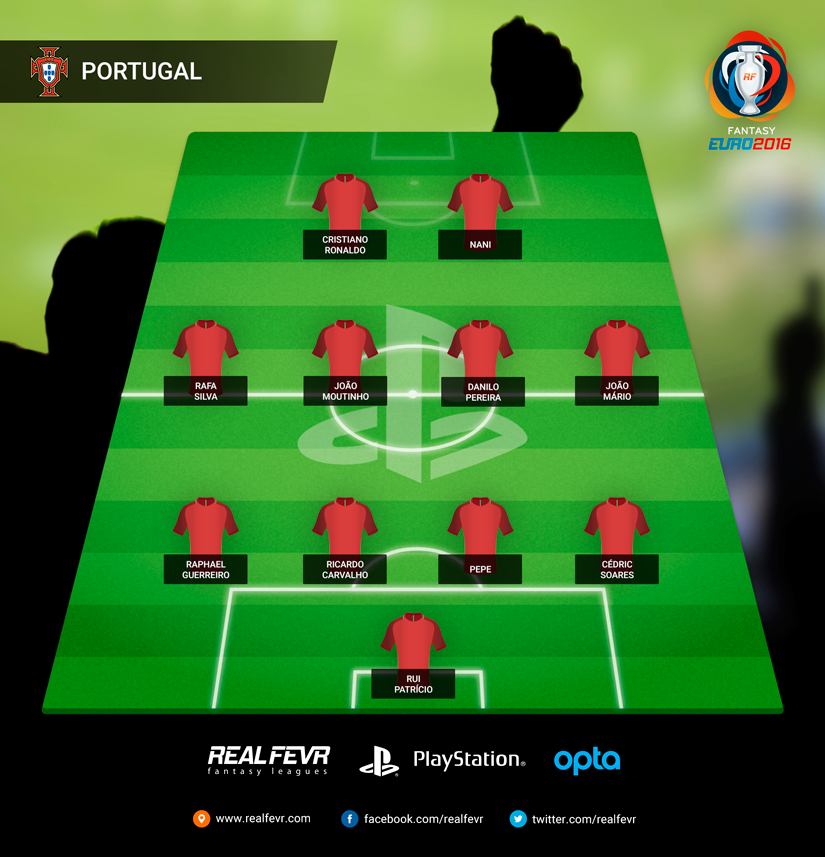 The holding midfielder position is still up for grabs between William Carvalho and Danilo Pereira, with the latter taking the pole in recent friendlies due to his higher intensity and scope of duties, losing only in pass quality when compared to William Carvalho.

For the wings, only João Mário seems to be a lock among several options. After breaking through in the Portuguese League, the Sporting youngster will surely take advantage of the stage for another opportunity to put himself in the eyes of Europe’s biggest clubs, keeping the usual transfer rumours running through the competition. On the opposite side, Rafa Silva, André Gomes or even Adrien Silva and Quaresma are possibilities for the “Engineer” to choose from, depending on tactical variations adapted to opponents.

The offense is left to two wingers, playing more on the inside than what they are used to, with Ronaldo having some familiarity due to Real Madrid’s similar scheme without Benzema.
No matter the position, Ronaldo is one of world football’s stars and, if we exclude friendlies, has 44 goals and 14 assists in 83 caps for Portugal. However, Portugal’s dependency on Ronaldo is huge and his standard of play will correlate directly to the outcome of the Portuguese dream.