This week had many goals and great games. Here is the Dream Team of the week for La Liga de Los Ases fantasy league.

He was a wall for the canarian team by making 8 defenses. He was fundamental for his team to get the tie. And 1 more point.

His return from an injury couldn’t have been any better. He made his best game this season by scoring a goal and making Adán avoid another. He also offered Bale an opportunity that was only avoided by the post.

Didn’t had much trouble during the match but everything that he had to do he did well. He tried to score more than once and, in one of those attempts, he ended up doing an assist to Rafinha.

During 84 minutes he wasn’t doing much of a game, as well as the rest of the team. But then he recovers a lost ball, shoots a missile into the corner of Pacheco’s goal and offers Malaga 1 point.

He scored, assisted and recovered many balls. It was a perfect game in the midfield of the yellow submarine.

Took advantage of his opponent’s defensive shortcomings to score 2 goals. The second one was perfectly executed chip over Sergio Álvarez.

He was the hero in Prandelli’s debut by scoring his team’s 2 goals in El Molinon.

Barcelona’s rout started on his feet with an encore. He is the midfielder with more goals na La Liga, along with Sansone, with 4 goals this season.

A perfect exhibition where he single-handedly destroyed Granada. Scored 3 goals that made the turnaround in the scoring board. He then was a true altruist and started offering goals to his team mates. This game week he broke the record for the highest score by a player in a single game in La Liga de Los Ases. So far.

Osasuna’s first victory this season was due to Sergio León’s goals. In the last 4 games he scored 4. The first was an excellent head finish. In the second one he took advantage from Riesgo’s mistake to turn the score around.

This season start hasn’t been easy for Karim. But this weekend he showed his class with a goal and an assist. He also showed Zidane that he is the best number 9 Real Madrid has. 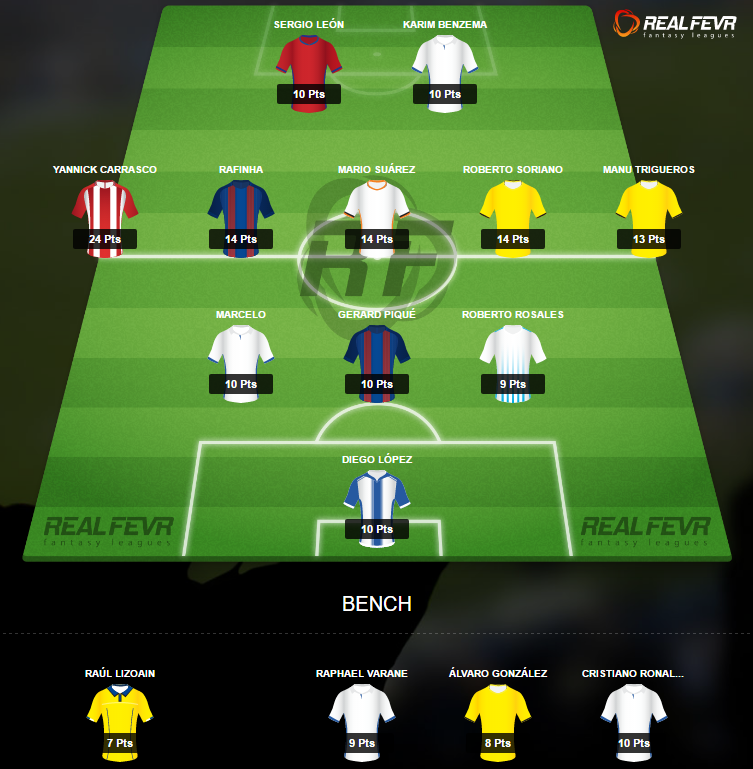